Navy Arctic Submarine Laboratory and APLIS have set up their ice camp near Purdhoe Bay1 in support of navy submarines2, submariners, and Arctic researchers, collectively referred to as ICEX 2011.

Reconciling various data sets and models is an important and challenging task.

The Newton site may be useful to students with Arctic questions—also there is a searchable database of archived questions.

UPDATED 01/21/2011 GAO, ARCTIC CAPABILITIES DOD Addressed Many Specified Reporting Elements in Its 2011 Arctic Report but Should Take Steps to Meet Near- and Long-term Needs (pdf) 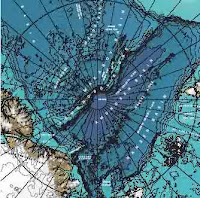 
"...We present a synthesis of decadally resolved proxy temperature records from poleward of 60°N covering the past 2000 years, which indicates that a pervasive cooling in progress 2000 years ago continued through the Middle Ages and into the Little Ice Age...The cooling trend was reversed during the 20th century, with four of the five warmest decades of our 2000-year-long reconstruction occurring between 1950 and 2000."--Science, Vol. 325. no. 5945, pp. 1236 - 1239, September 4, 2009--

Public data coming out of this year ICEX 2014 (and "Ice Camp Nautilus") are non-substantive, uninteresting and uninformative.

Perhaps, this reflects a hasty last minute decision to conduct an ICEX in response to President Putin’s latest "shirt removing" charade (annex Crimea)? Officially, ICEX 2014 was scheduled before his charade—hopefully he'll put his shirt back on before he catches a cold.

A quick status of submerged submarine communications—communications at speed and depth is out (i.e. too expensive and uni-functional), multi-functional autonomous vehicles and network nodes are in.

UPDATED 10/22/2011 NOAA, 4th Symposium on the Impacts of an Ice-Diminishing Arctic on Naval and Maritime Operations 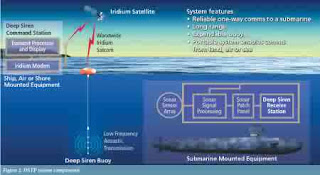 
“Our measurements show that at the relevant altitudes about half of the ozone that was present above the Arctic has been destroyed over the past weeks,...Special attention should thus be devoted to sufficient UV protection in spring this year,”--AWI--

UPDATED 10/23/2011 Notwithstanding Virginia-class images its structures and systems are not currently capable or optimally configured for extended autonomous under-ice Arctic operations. Some have recommended that these deficiencies be remedied, at least for some current VCS platforms.

3. Arctic submariners will immediately understand that an Arctic sea ice salinity gradient impacts more than their shower, meal, and coffee.

The salinity of Arctic sea ice changes with the ice's age. As older and less salinated Arctic ice melts it changes the ocean salinity—dramatically impacting a submarine's hearing, maneuvering, and tactics.

Climate researchers have a global interest in the thermohaline cycle—how it impacts on global temperatures.

UPDATED January 10, 2011 Those wanting a general undergraduate level understanding of the carbon cycle and the oceans' role in modulating climate may enjoy the David Archer's global warming video lectures and related textbook.