UPDATED 02/07/2018 USAToday, Two women Say Marines Did Nothing After They Complained of Sexually Explicit Overtures by Officer

Ah..., the senator needs to stop talking about holding our military leaders accountable for ensuring all military personnel is completely free from sexual assaults and harassment (hint: begin removing stars, leaders, and assailants...).


Vox, Why this elbow is a TIME person of the year

A most unfortunate display of ignorance of the issues confronting college women (and some men) on today's campuses. Administrators must ignore Secretary of Education DeVos's display of ignorance and make sure the college experience and environment is free of all sexual assault.

The "new" alt-white-house decision on transgender persons† will likely exacerbate the navy's efforts to solve its sexual harassment problem.

† The chairman of the Senate Armed Services Committee has issued a statement questioning the "new" alt-white-house decisiion on transgender persons in our military.


"...I’ve heard hundreds of times that 'these actions are being taken by only a small minority...Prove that. If that’s true, then the vast majority of men and women need to stand up and smother this behavior. To become intolerant. To act to put a stop to this. And if you’re one of that minority that just won’t get it, then it’s time for you to leave the Navy..." --NavyTimes quoting CNO, John Richardson--

Just a reminder of one of those hundreds of times...we've been told that the sexual harassment will not be tolerated and those (misogynist and miscreants?) that don't get the message will be driven from the ranks...


RetroReport, The Legacy of Tailhook

General Neller et al. must change our Marine Corps' deviant on the ground ethos. Pleading for marines to accept our marines regardless of their sexual desirability, genitalia, or gender identity is laughably meaningless3! The commandant is asking marines confronted with a misogynistic closed culture to report someone with whom they may go to war tomorrow!

General Neller must appoint a platoon or company of, preferably multi-gendered marines to publicly investigate and prosecute, in partnership with civilian authorities the entire SNAFU from first photo to last.

UPDATED 03/10/2017 NavyLive, Department of the Navy Leadership Reinforces Importance of Core Values and NavyLive, A Team of Winners and RevealNews, Hundreds of Marines investigated for sharing photos of naked colleagues and MarineTImes, A nude photo scandal has shaken the entire Marine Corps

"When we fight [i.e. maim, kill, and die], we will depend on each other with our lives. The binding energy that allows that to happen is trust. Trust in a teammate’s competency to do things right. Trust in their character to do the right things...Go beyond just treating each other with dignity and respect – that’s the bare minimum. We must [commit and] work hard to make each other better. To build a team of winners."


One step forward and several dozen backwards. Lots of work and research required from both men and women on the long road to extend a professional Marine Corps into the 21st century.

An Associated Press analysis reveals cherry-picked or omitted data was submitted to Congress to give the impression that the military was more willing to prosecute sexual assaults than civil authorities.

UPDATED 04/07/2016 WP, Why sex assault reports have spiked at the Naval Academy, West Point and the Air Force Academy 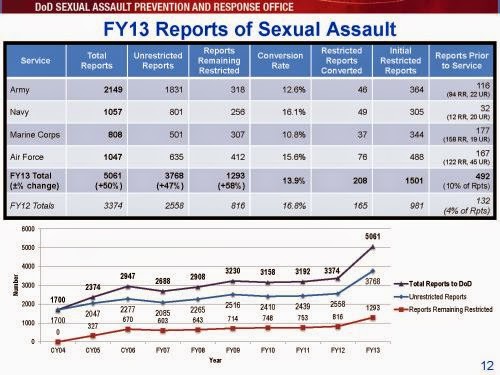 Our U.S. Navy, more often a leading indicator, is lagging while stumbling through its systemic sexual harassment, assault and rape problem—a response, to date more indicative of 1950 than 2013.

It may be necessary to temporarily transfer reporting and responses for all sexual harassment, assault and rape events outside the chain of command until our services develop a fundamental understanding of the problem (i.e. conducts the research).

Expressions of outrage, condemnation, commands or implementation of punitive measures and prohibitions however necessary or well intentioned only demonstrate a profound lack of understanding of the problem.

Expressions of outrage, condemnation, commands or implementation of punitive measures and prohibitions are not substitutes for effective solutions.

Evidently our Air Force is leading the way in demonstrating how not to eradicate our military services' sexual harassment, assault and rape epidemic.

SecNav, CNO, and Superintendent must stop expressing outrage  preaching (cheap but ineffective) and sponsor the novel research required to guide our future naval officers toward a perceptive parity in sexuality—no mean feat.

SecNav, CNO, and Superintendent express shock and condemnation over the latest annual report (pdf) that finds no statistically significant changes in prevalence rates of sexual harassment of women at the Naval Academy.

A stand against sexual assault is necessary but not sufficient to move our professional sailors to a personal perceptive parity in sexuality—it's much different and more complex than the typical, traditional and relatively simple (but still difficult) transition from a civilian to military ethos.

Our navy must sponsor the novel research required to teach and train our professional sailors (especially our submariners) how to develop a personal perceptive parity in sexuality—novel research that may well discover that current military and sexual conquest ethos are mutually enabling codependents!

The prophylactic measures described by COMPAC (i.e. avoid circumstances and events related to poor judgment) will be helpful pending our navy's implementation of a personal perceptive parity in sexuality program.

1. An unimaginative course title of: "Beers, Boobs and Boners".

Boobs are midship(wo)men that have not yet mastered the relationship between naval missions and esprit de corps—Boobs that progress to our submarine force, for whatever reason are potentially harmful and dangerous.

A Boner is a Boob triggered event, which by definition is unrelated to either a naval mission or espirt de corps (e.g. sexual harassment, assault and rape).

3. The existing Marine Corps ethos conflicts with changing societal notions of gender identity and roles. The commandant and Marine Corps will need help and time to evolve an improved ethos consistent with changing societal notions of gender and roles. The commandant is likely to learn that an existing ethos is not helpful in changing to another ethos.