UPDATED 03/25/2017 UTubeNavyDetailers, PERS 42 Submarine Community Screening Board Video (also, peruse the numerous "how to write" a fitrep for LDOs and URLs; it's an art!)

UPDATED 07/10/2015 NIH, Ionizing Radiation in Pregnant Women: A Review of the Safety and Guidelines

Past social dogma and stereotypes lack any positive or neutral buoyancy in today's modern and extraordinarily challenging submarine environments. Unlike, say an idea for new materials, which are capable of performing in the equally challenging environment of a submarine's nuclear reactor compartment while significantly lessening its overall density7.

Stated differently past dogma and stereotypes in a submarine's environment will sink to collapse depth in a positively reinforced loop of greater density (i.e. greater mass in a smaller volume). Professional submariners work in dedicated teams to ensure their submarine never experiences this singularity.

There's a big difference between submariners viewing the adolescent movie "Porky's" and secretly producing or distributing a "Porky's" starring submariners5.

Surely, all "Porky's" producer(s) or distributor(s) have exited our submarine service and unreproving viewers identified and counseled or reprimanded, at a minimum?

Adolescent shenanigans should not deter or impede our nation and submariners from building a strong world-class 21st century professional submarine service that includes coeds.

Kudos to our SecDef, SecNav, CNO and submariners on speedily moving to a gender neutral professional submarine force!

Responding to the seemingly perpetual "close quarters" argument is as simple as specifying minimum attire4 and encouraging all submariners (male and female) expressing such "contact concerns" to seek career enhancing gender identity training or just incorporate such training into the basic submarine school curricula.

It's bizarre logic that explicitly or implicitly argues that our highly trained and professional submariners must constrain their sexuality with physical barriers—those (male or female) requiring such constraint must not be permitted to become or remain submariners. 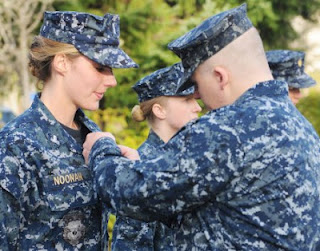 UPDATED 08/23/2012 Day, Admiral says USS Miami will be repaired; hints at timing for women submariners at base Article based on recent CNO All Hands Talk at Sub Base, Groton (below):

Any submariner qualified to stand your watch while underway does not represent an obstacle, but a sleep potential.

U-T San Diego, Women on Subs Very Successful The article states that Vice Admiral John M. Richardson, Commander, Submarine Forces is close to a decision on whether all submarines will be open to women.

It will be most unfortunate if the a silly3 "close quarters" argument is permitted to impede or delay women's speedy integration into all submarine billets and submarine classes platforms for which they are qualified.

Of more concern is the tall submarine sonar officer (pictured center) who may find very few places on a fast attack submarine (especially Los Angeles-class) to stand up straight!

1. President Theodore Roosevelt is pictured behind the submarine officers.

3. It's as silly as arguing that women should ride in the back of a spacious pick-up truck, but not its close quarter cab.

In fairness to those whose traditions have routinely excluded women, these are fast evolving and dramatic changes to our submarine force. Shocking customary sensibilities can be destabilizing, particularly if you're an older and aging white congressman.

4. For example skivvies and a T-shirt, although some submariners (male and female) may prefer to wear more and privacy barriers (e.g. curtain).

5. It's not like there's a dearth of existing pornography to match any submariner's preferences.

7. It's not uncommon for professional submariners to estimate the percentage of total weight and volume allocated to fast-attack submarine propulsion at thirty-five and fifty, respectively.